The land is our most valuable resource. It is indeed much more than this: it is the means of life without which we could never have existed and on which our continued existence and progress depend. The resources of the land are neither inexhaustible nor indestructible, as many men and women have already found to their cost. Resources that had taken many millions of years to accumulate have been squandered or allowed to waste away in a few decades, and this squandering and wastage is continuing wherever definite measures to stop it are not being undertaken. Some of the resources of the land, for example, deposits of metals, coal or oil, are not in practice renewable nor can they be both preserved and used. Many other resources can be preserved and even improved in use. It is essential to the mere continued existence of human life on earth, to say nothing of our continued and increasing prosperity, that the resources of the land should be known as accurately as possible. The limitations of those resources which cannot be renewed should be understood and their unnecessary waste avoided, while renewable resources should be carefully conserved and used without waste or damage. It should be our aim to hand on the natural heritage improved, or at least unimpaired, to future generations.

Land surveying is basically an art and science of mapping and measuring land. The entire scope of profession is wide; it actually boils down to calculate where the land boundaries are situated. This is very important as without this service, there would not have been railroads, skyscrapers could not have been erected and neither any individual could have put fences around their yards for not intruding others land.

Traditional surveying is at least 3000 years old, having been used by the ancient Egyptians to mark out fields after the annual Nile floods and refined by the ancient Greek and Romans in the Classical era. Survey techniques and instruments were then re-invented in the Italian Renaissance with reference to the Arabic scholars of the 1st Millennium. Survey methods were considerably enhanced by inventions in optics, metallurgy and mechanical engineering during the 17th and 18th Centuries, which allowed the development of instruments such as theodolites, levels, compasses and sextants. This generation of optical/mechanical instruments were used to measure the 19th Century primary triangulations on which the mapping of many nations is based. In the late 20th Century digital electronic techniques such as laser distance measuring, electronic logging, GPS and handheld computers revolutionized traditional surveying, although it introduced power demands that had not existed previously.

The name Cadastral is a Latin base term which refers to a registry of lands. Cadastral Surveying is surveying of land so as to determine and define land ownership and boundaries. Most people do not take seriously the issue of surveying their properties before they develop or erect a fence/wall, until they have found‐out that they have spent so much money on those developments etc. Land registration for land management purposes requires cadastral surveying and mapping. Cadastral surveying and mapping includes the procedures to demarcate and identify boundaries of parcels allocated to different users with some kind of right, for instance the right to use the parcel for a specified purpose. The boundaries are surveyed in the field and described on the map. The parcel is given a unique identification number, which forms the base for the registration of the parcel, the user and other information about the allocated rights in a public registry. The specific maps of each parcel are usually compiled to maps, displaying the distribution of land use rights over larger areas, so called cadastral index maps. The purpose of land registration is usually to provide security of tenure for the land user and provide information on land use rights for land administration and taxation to be used by different responsible authorities and the general public. Cadastral data need to be updated whenever a change of the boundaries or of the user rights connected to the parcel occur.

Whoitam Image Measurement is special for measuring cadastral maps and cadastral surveys. Because in traditional method, land parcel areas are determined graphically in the field. The method is not very accurate, but even so it seems difficult to find another way in the present circumstances and working conditions with heavy time constraint. The use of planimeters, measuring the area by coordinates and other area calculation methods requires huge work and time. But Whoitam Image Measurement provides you accurate and time-saving measurements. A number of simple and user-friendly tools help you to measure length, area, draw, identify boundaries and merge your images. 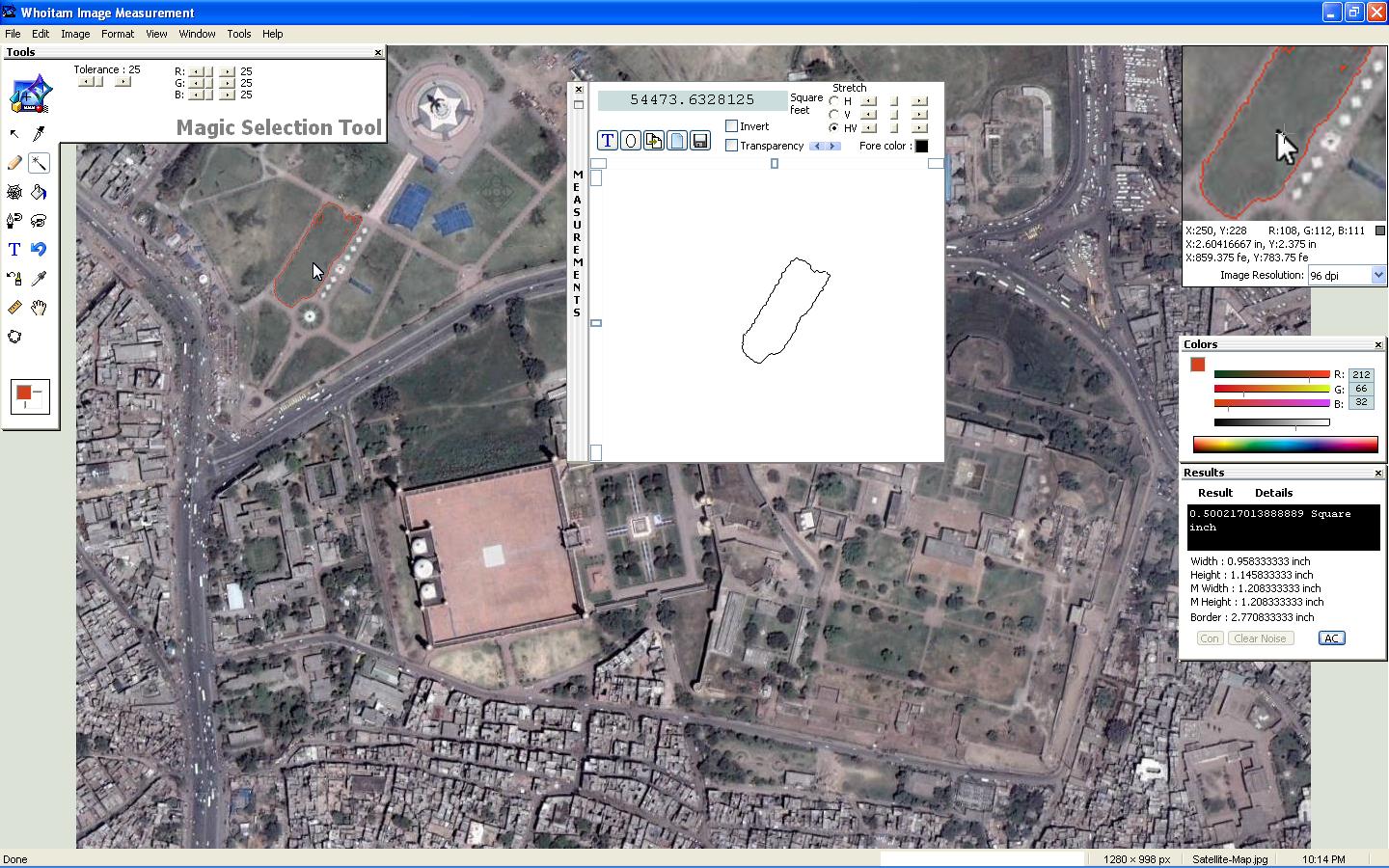 The measurements may be done by pointing and clicking or with the magic selection tool which automatically detects edges on objects in the images. It can select any irregular shaped region. Then you can clear noise automatically in selection that reduces the area. You can also get area by polygon tool. Whoitam Image Measurement can load different types of images. Include medical images. Angle, distance, perimeter, area, point and line measurements may be done by using the tools in the Tools Palette. The tools are designed to be easy to use tool for measuring digital images.

Automatic calibration is available to provide real world dimensional measurements such as inches, meters, feets, decimals etc. For example, draw a line of 1 inch length on a real paper. Scan it and load in Whoitam Image Measurement. Then measure it by scale tool. It will show 1 inch. No calibration is required. Again print it by Whoitam Image Measurement. On real paper it will show 1 inch length again. The measurements are drawn over a measurement layer, so the original image is not altered in any way. They can be copied and pasted to any other program. You can draw and process images programmatically with script. 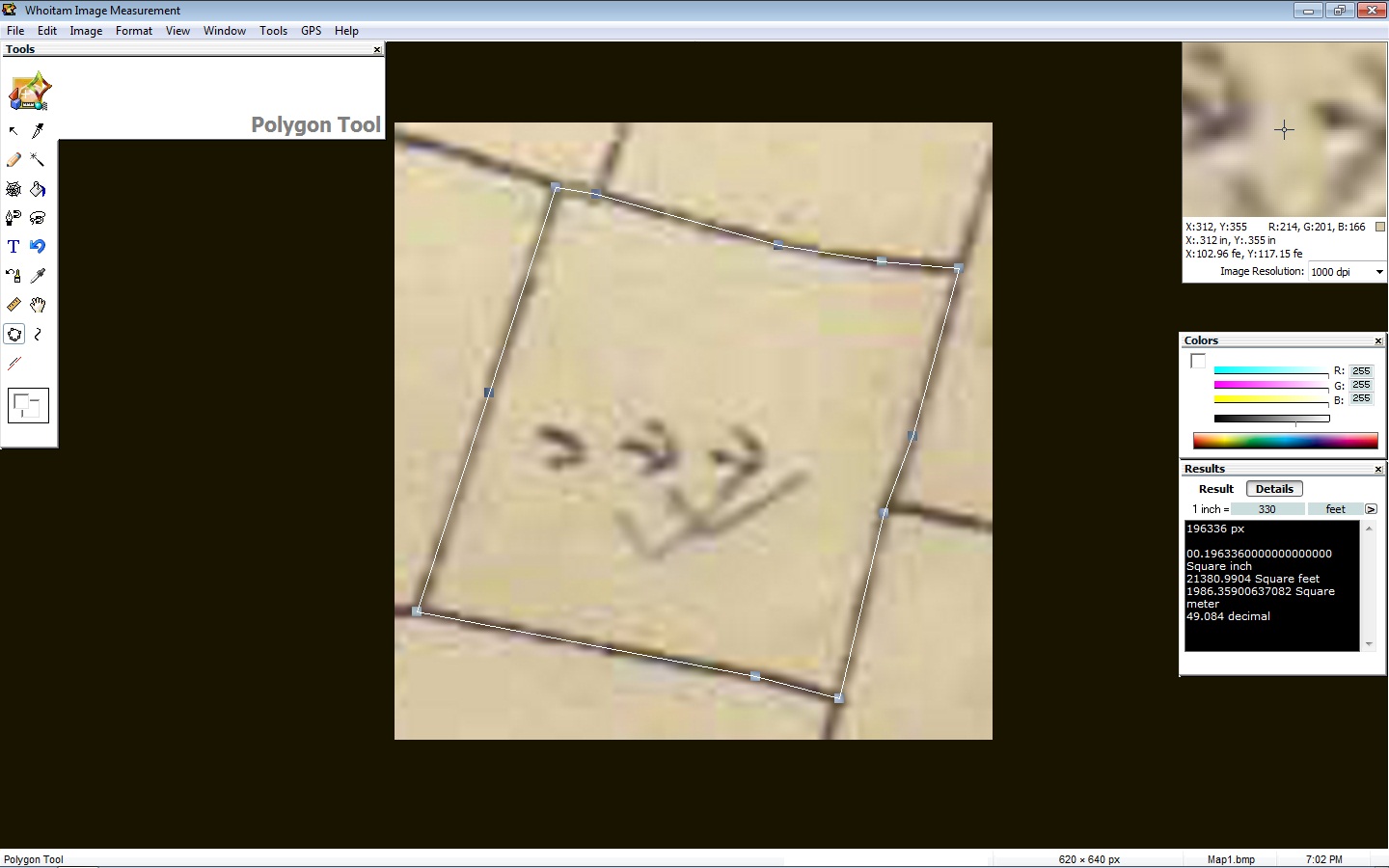 You can get distance between two points by scale tool. 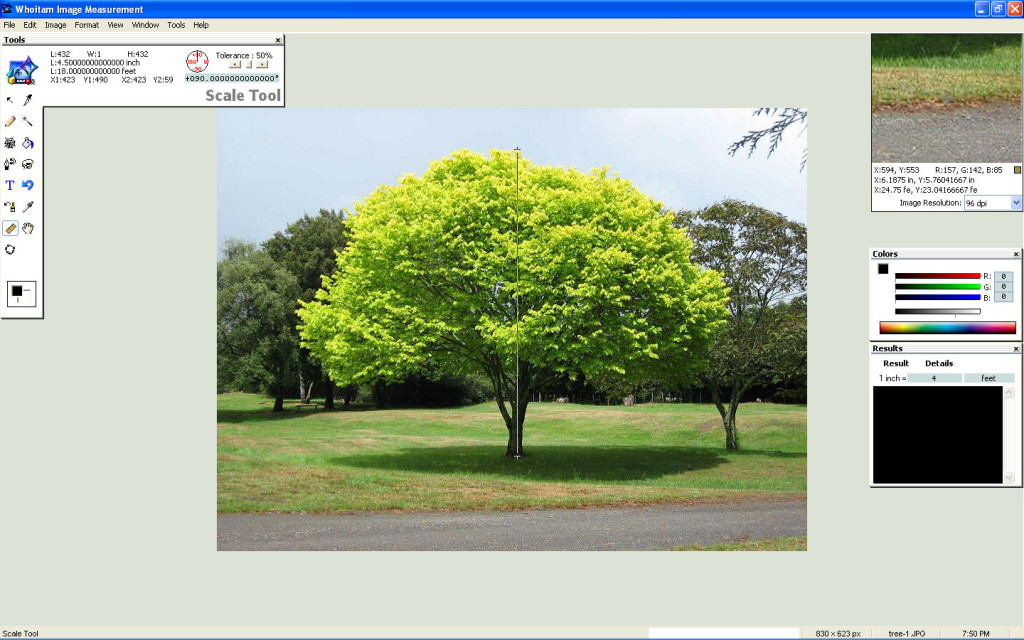 It can generate a matrix with the decimal values of the image pixels.

Video files and live video can be captured in still image and then measurements can be performed. 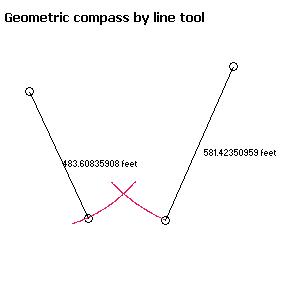 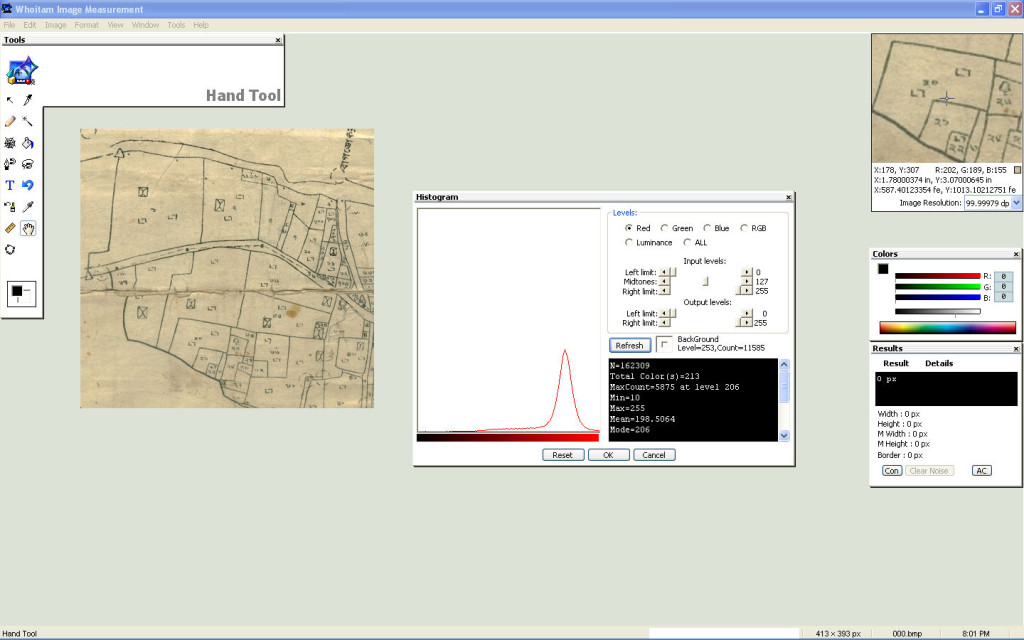 You can rotate, merge, flip image. You can analyze image by Pixel Profile. 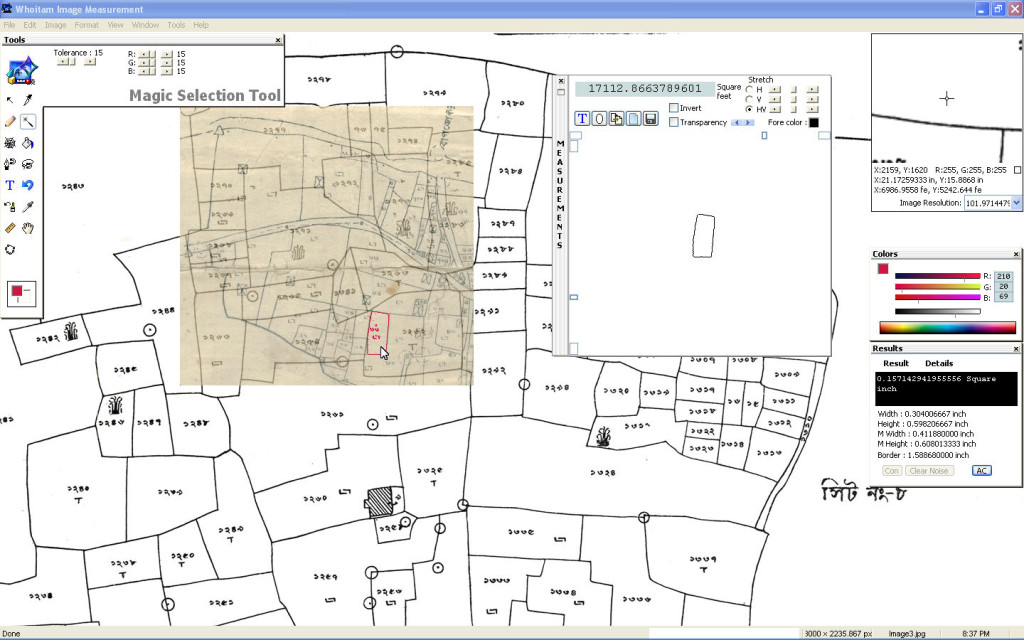 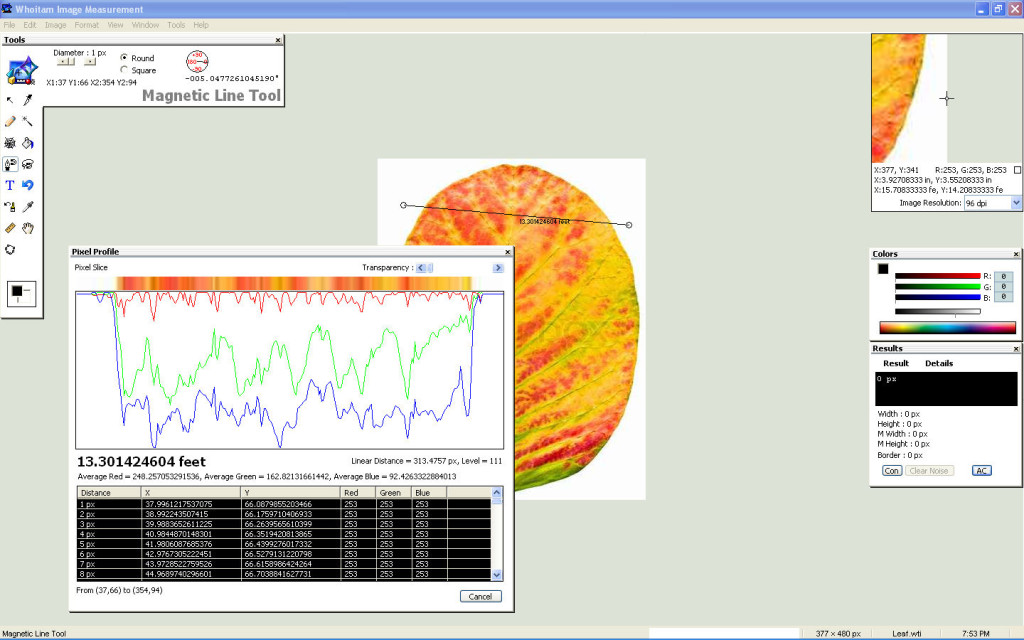 You can even count how many objects there are in an image. The interface isn’t hard to get accustomed to.Use the application to easily acquire, analyze, measure, and edit images. 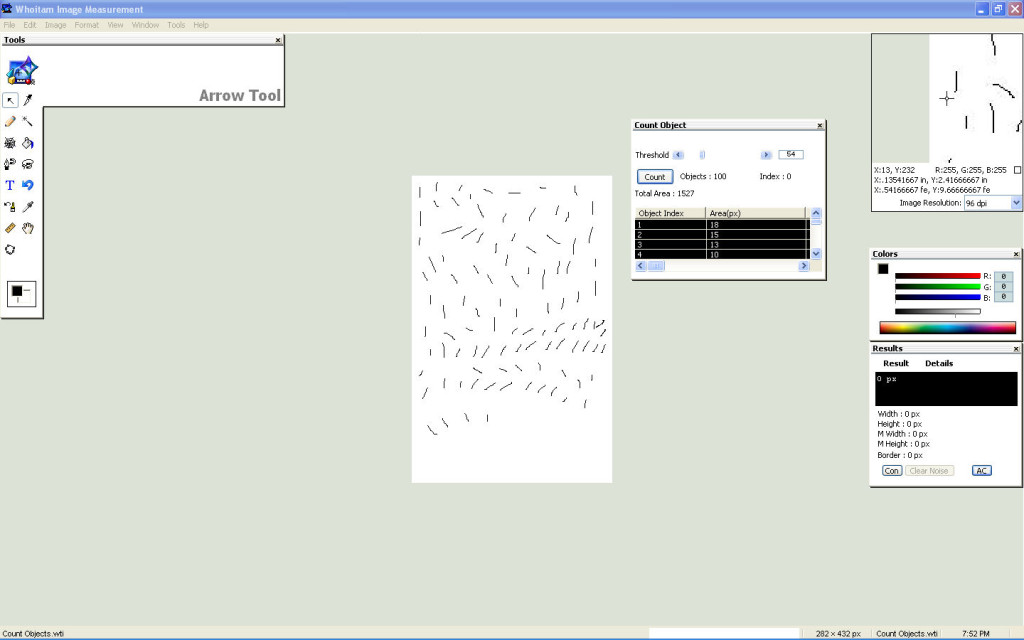 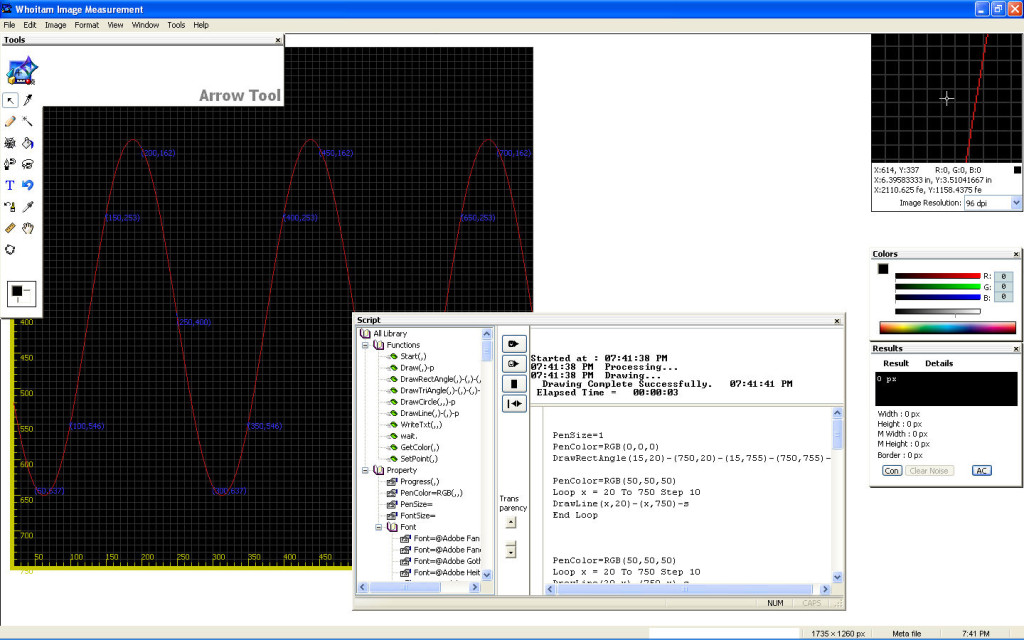 You can visualize GPS Nmea data by Whoitam Image Measurement. 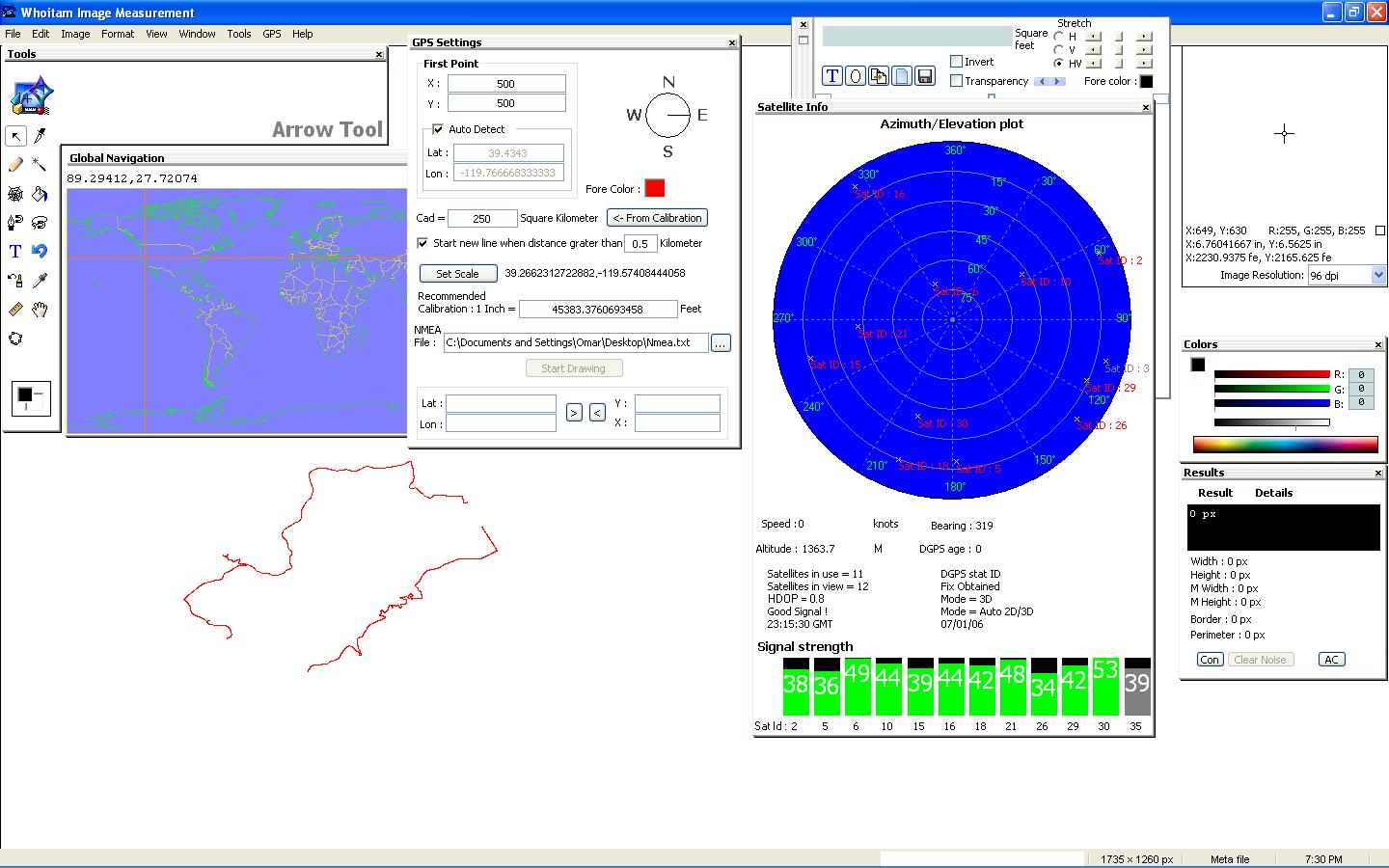 You will get 3 minutes and 2 magic selection in any time per instance to test this software.

One thought on “Whoitam Image Measurement”